Home Metro News Our Nation Is The Target Of Attacks, Not The Victims – Tinubu
Facebook
Twitter
WhatsApp 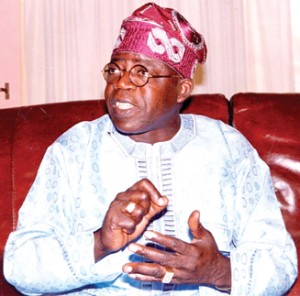 Former Lagos State Governor and national leader of the All Progressives Congress (APC), Senator Bola Tinubu, Tuesday, raised the alarm that Nigeria was under attack, following the killing of about 40 students in Yobe State by members of the Boko Haram sect, calling for the arrest of the perpetrators.

“The recent carnage in Borno State and now at the College of Agriculture in Yobe State reminds us of the sinister nature of the enemy our nation now faces. There should be no mistake at this somber moment. Those who launched these attacks did not launch them at the people they killed. They knew not the names of their victims or who they were.

“The dead were just unfortunate souls who happened to be close enough to murder. The real targets of these massacres are our nation, society and any semblance of civilised, modern life. Nigeria is under attack and the earlier those in charge realise this, the quicker the situation can be arrested. In terms of security, the present is not safe, neither is the future secured,” Tinubu lamented.

Describing the murdered students as “innocent young people who were just entering the fullness of life,” the former governor said: “ These young people only wanted an education to improve their future and that of the nation. They were armed only with this desire and with the tools of students.

“They had done no one any harm. Yet, their attackers executed them in the cruelest fashion. “This is terror in its basest form. By this act, the crazed and armed menace we face tells us that attending school, attempting to get education, is now a capital offence. Those guilty of seeking to learn are to be executed.”

He therefore urged Nigerians to remain steadfast in the belief that enlightenment and progress were the best, adding that no matter how the enemies of the nation tried to frighten the people, Nigerians should continue to walk in the light of learning, justice, hope and tolerance, unity and progress.

“What we face is nothing less than a contest for the soul of the nation. We dare not lose the contest. These young people died just because they wanted to learn and live better.

“We can’t allow their deaths to be in vain. We must rededicate ourselves that all of our children shall learn and live better because of the education they shall receive.
“We must look beyond the deaths and spilled blood of these innocent children. In times like these, it is easy to give up and recede into our fears. Yet, we must be of good courage. We must not give way to sorrow or despair. We must forge ahead with our best plans and preparations for the people”

The APC leader however appealed to the federal government to take the issue of security of lives seriously and be more proactive in developing a comprehensive law enforcement, intelligence-gathering and economic incentives strategy that could checkmate the plague.

“I make this not as a partisan jab. I make this as a Nigerian who sees the larger danger lurking behind these attacks. These murderers seek to shutter the educational system in the North. Should they accomplish this, they will only attack another social institution, then another, until all are flattened. They intend to make Nigeria desolate. In their warped minds, this will be paradise. Paradise for them will be purgatory for the rest of us”

Tinubu, however, said that Nigerians must not give up but keep hopes alive as the country shall overcome its present predicament and that justice would ultimately prevail.

“We cannot allow their violence to dictate the path that we must go,” he said.