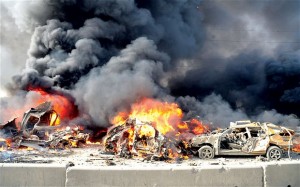 At least 104 people were killed and dozens more wounded on Friday in a car bomb explosion near a mosque in the Damascus province town of Suq Wadi Barada, a monitor said.

“At least three of the dead were children,” said Observatory director Rami Abdel Rahman. Other activists said the death toll was 210.

The town is under rebel control, but troops loyal to the regime of President Bashar al-Assad were positioned right outside it, said the Syrian Observatory for Human Rights.

State news agency SANA also reported the blast, and blamed “terrorists,” the term the Assad regime uses for forces fighting to oust it.

“The car exploded while the terrorists were packing it with explosives near the Osama Bin Zeid mosque. Terrorists and civilians were killed,” said the agency.

“Two bodies have arrived at the Moassat hospital, including a seven-year-old child’s. There are also 30 wounded people, most of them critically.”

But anti-regime activists blamed loyalists for the blast. Amateur video shot after the explosion showed clouds of smoke rising above a burning car, while cries of men and women could be heard amid the chaos that followed the blast. The footage also showed people carrying away casualties of the explosion.

A second video showed the bodies of the dead, some of them covered with blankets. Among the bodies shown in the footage was that of a child.

Car bombings have plagued Syria in recent months, killing scores across the country. Syria’s 31-month conflict has killed more than 115,000 people, according to the Observatory.