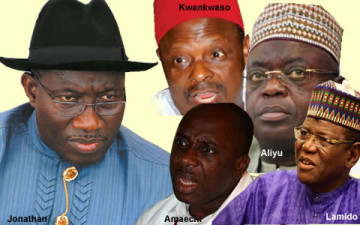 A group known as G-6, a socio-political organization working in the South-South with presence also in the six geo-political zones of the country, has launched a passionate appeal to the seven aggrieved governors under the banner of the Peoples Democratic Party (PDP) led by Alhaji Abubakar Kawu Baraje, not to overheat the polity just as they called on Alhaji Bamanga Tukur to play a fatherly role in the lingering political impasse rocking the ruling party.

According to Mrs. Gbonkumor, it was rather unfortunate that leaders, who are supposed to work in the public interest, were more concerned about their own personal interests.

“One would naturally expect that as leaders, the so-called G-7 governors should strive to ensure mutual trust and harmony in the country. But the irony, however, is that these governors are rather fanning the embers of disunity because of their personal selfish interest,” she said.

Speaking further, she said: “It is rather unfortunate that the G-7 governors are antagonising President Goodluck Jonathan when they should be working together to ensure socio-economic progress of the entire populace”.

The aggrieved governors, who pulled out of the mainstream PDP on August 31, to form their own faction in conjunction with ex-governors, serving National Assembly members and a former vice-president, include Governors Rotimi Amaechi of Rivers, Abdulfatah Ahmed of Kwara, Mu’azu Babangida Aliyu of Niger, Rabiu Kwankwaso of Kano, Sule Lamido of Jigawa, Aliyu Wamakko of Sokoto and Murtala Nyako of Adamawa.

But the G-6 noted that it was evident from President Jonathan’s words and actions, that he is a detribalized leader, who is ready to work for the good of all and not self-centred as most of the G-7 governors.

Mrs. Gbonkumor, therefore, appealed to the governors to bury the hatchet and close ranks with Mr. Jonathan in the best interest of Nigerians, who they claim to be representing.

The national coordinator of the G-6 also tasked the PDP national chairman, Mr. Tukur on the need to be a unifying force in the party instead of being an instrument of discord.

“As a father figure, we expect Alhaji Tukur to operate an open door policy. That is the only way to curtail intra-party wrangling being witnessed among the PDP fold in recent times,” she admonished.