Some of the newest names making waves right now in Nollywood are Angela Okorie, Colette Orji and Queeneth Hilbert. 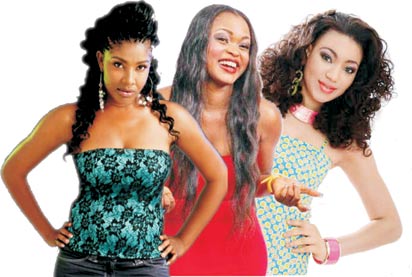 The Trio who seem to have nothing in common except for their talent, drive, beauty and perhaps the hands they have on the knob of the pulse of the movie industry have had their paths crossed more often than not.

While no evidence exists whether the three beauties have had to jostle for a role, there is more than enough evidence to prove the ladies have fought each other for an award.

In the ongoing Vanguard’s Sexiest in Nollywood public opinion poll, the trio have been engaged in fisticuffs of sorts to make the last ten in the competition. As at last week, Angela seems to be leading at 5th position but hotly being chased by Colette Orji at 6th. Queeneth, who has had mixed blessing in the run is chasing hard at 8th place.

As if that is not enough to pitch the ladies’ wits against one another, Chase Awards nominees were unveiled during the week where their names come up again to battle for the position of the Best New Actress of the Year. The three of them complete seven-man nominees list which include Titi Oludipe, Tayo Sobola, Mary Remmy and Memunat Yinusa.

Though Chase hasn’t come up with a list of films which earned the actresses the nomination but a good guess may not be inappropriate.

Colette has said she is particularly fond of ‘Demonic Angel’ a movie which is a sequel to ‘Angel’. Other films she thought might have put her in the picture include ‘Tears of Vengeance’ or ‘Illuminati’.

For Queeneth, she felt her movie “My Daughter, My Jewel” may be her trump card while Angela fingers no film in particular but the trouble she went through in shooting ‘Widows Cot’, a film that saw her shaving her hair, may just be her calling card.