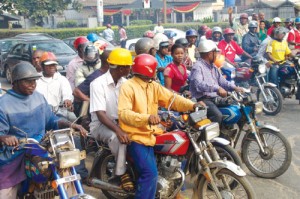 A policeman was Monday evening attacked at the Berger Yard area of Oshodi-Apapa Expressway, by some men suspected to be commercial cyclists, popularly known as Okada riders.

The policeman’s sin according to sources was seizing a motorcycle belonging to one of them, and was intercepted at Berger Yard Bus Stop by the mob while he was taking the seized motorcycle away.

The officer was said to have been beaten up by the mob who shouted Ole, Ole (thief, thief), as they gave him the beating of his life, also hitting him on the head with sharp objects.

Before people realised he was actually a police officer and had seized the bike, the mob had retrieved the motorcycle and made away with it.

The policeman was said to have been seriously injured and was taken to a nearby hospital.

No word yet from the police on the attack.