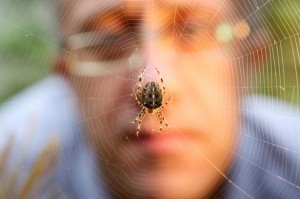 For years, posties have been on their guard against vicious dogs.

Instead of a cheque he was waiting for, Stuart found a note which read: “No access – massive spider web in front gate”.

Stuart, 42, said:“I couldn’t believe it. He was either spider-friendly and didn’t want to break the web or a terrified arachnophobe.”

Stuart’s spider was the size of a 10p coin and he had left by the side gate to avoid breaking the web himself.

After a night away, Stuart found his mail had finally been delivered in Clapham, South London, by a postman who added his own remark to his colleague’s note which said: “WHAT!”.

Royal Mail apologised and added: “Alternative arrangements should have been made.”