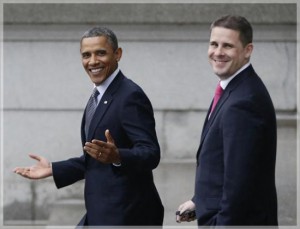 Earlier today, a senior advisor to President Obama tweeted what his subconscious mind was already thinking.

Dan Pfeiffer was responding to a Twitter discussion about political polarization and how the Internet and social media plays a major factor.

He tweeted: “Also a much nigger factor on the right.”

What Pfieffer meant to tweet was the word ‘bigger’ — but since ‘nigger’ was already occupying his subconscious mind, that’s what came out.

Why is Obama’s senior advisor lollygagging around on social media anyway? Is he one of the 800,000 furloughed non-essential workers?

Pfieffer immediately realized his error and deleted the tweet. But by then it was too late. Once released into the wild, a single tweet can cause all sorts of mayhem. 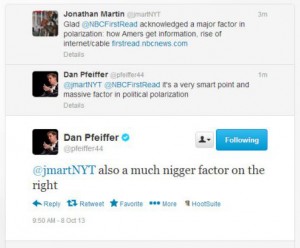 According to the famed psychologist Sigmund Freud, a Freudian slip is the verbalization of an unconscious thought. In other words, the verbalization of something we are subconsciously thinking but can’t speak out loud.
According to Freud, unacceptable thoughts or beliefs are withheld from conscious awareness, and these slips help reveal what is hidden in our unconscious thought.
So tell us how you really feel about Obama, Mr. Pfeiffer.