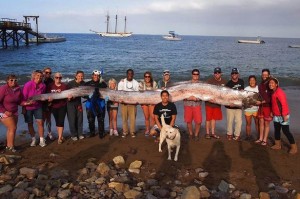 A rare oarfish has been discovered in California – and it measures a whopping 18 feet long.

She told the New York Daily News: “I was thinking, ‘What could this be?’ It’s so big! We usually don’t have anything that long in our bay… We snorkel here almost daily, so it’s crazy to find this.”

The bony fish was too heavy for her to get onto the shore alone, and it took 15 colleagues to help bring the enormous creature out of Toyon Bay.

Jeff Chace, a CIMI program director, said to the New York paper that the oarfish was a rare discovery: “I’ve been here for a little over 10 years, and I’ve not seen one at all.”

The oarfish, a long, bony fish, is rarely seen and many believe it is the explanation for mythical sea serpent sightings of history.

“People always wondered if old-time sailors saw this unusual animal in the ocean and wondered if it was some kind of sea serpent,” Chace said.

Far from the ferocious monsters of legend, the oarfish has a that physiology suggests it is relatively harmless, Santana explained.

CIMI sent tissue samples and footage to Milton Love, a fish expert with the University of California at Santa Barbara, for analysis.

The oarfish is currently on ice, but Chace wants to bury it on the beach in the hope that other animals will eat away its remaining tissue so that CIMI can display its skeleton.