The seven governors of the Peoples Democratic Party  on Monday opened up on the cause of their dispute with President Goodluck Jonathan and the leadership of the PDP. 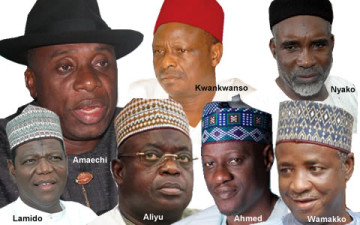 They said the President had refused to act on the issues they raised during their meetings with him and some leaders of the party on how to restore the crisis rocking the party.

They added that the President had refused to act on issues discussed with the Chief Olusegun Obasanjo-led Elders Committee and the reports presented to him.

Rather than act, they said President Jonathan and his supporters bluntly turned down the report.

The governors stated this in the communique issued after the meeting, which they held in Abuja on Sunday night.

The communique was signed by the National Publicity Secretary of the New PDP, Chief Chukwuemeka Eze.

Eze said the Sunday meeting reviewed all the peace meetings so far held with President Jonathan and the Dr. Bamanga Tukur-led PDP and commended the aggrieved governors for the maturity they have exhibited  since the beginning of the crisis.

He said, “Some of the demands presented by our governors  include the need to reverse the impunity in Rivers State, where a sitting governor was suspended from the party against the constitution of the Federal Republic of Nigeria and the PDP Constitution, and refusing to uphold the result of the Nigeria Governors’ Forum election that saw Amaechi winning 19 votes as Jonah Jang’s 16.

“Others include our request for the removal of  Tukur as our party National Chairman knowing his flawed election as our party Chairman, and ending the impunity in Adamawa State, among other demands that will put PDP in a strong position as a political party but for reasons not too clear to some of us failed to receive the blessing of Mr. President.

“To us, we see all these as attempts by the Tukur’s faction to destroy the party seeing that they (those in Tukur’s group) have no stake in the party anymore.”

The meeting mandated its mobilisation/contact committee to explore other options available to the members of the faction  should the dialogue with President Jonathan fails to yield any positive result for its future political activity.

Eze added that the committee was expected also to liaise with the new five other PDP governors and other leaders, who he said had indicated interest to join the group and to submit their report during the next meeting of the caucus that will hold in a week’s time.

On the deployment of Police to the vicinity of the Sokoto Governor’s Lodge, Abuja to scuttle the caucus meeting on Sunday evening, Eze said it was unfortunate that the police who were unable to find a solution to the menace of Boko Haram, kidnapping and other security challenges of the country could be cheaply used to harass innocent and unarmed civilians.

While reacting to the allegation against him, Tukur said he did not set up any parallel state executive in any state, adding that the party appointed caretaker committees in states where the tenure of their substantive officers had expired.

Tukur, who spoke through his Media Adviser, Oliver Okpala, said the aggrieved governors were not aware that the executives that were removed in the affected states wrote to the national headquarters of the party to inform it that their tenure had expired.