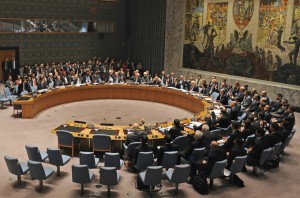 Saudi Arabia said on Friday it was declining its United Nations Security Council rotating seat, citing “double standards” that made it hard for the saying the 15-member body to end conflict and wars.

“The kingdom sees that the method and work mechanism and the double standards in the Security Council prevent it from properly shouldering its responsibilities towards world peace,” the foreign ministry said in a statement carried by state news agency SPA.

This, the ministry said, enabled Syrian President Bashar Assad’s regime to perpetrate the killings of its people, including with chemical weapons, without facing any punishment.

The kingdom, which has backed the Syrian rebels in their struggle to topple Assad, has in the past criticised the international community for failing to halt the civil war in Syria, now in its third year.

It said it was unable to take its seat until reforms were introduced, but did not specify what reforms it wanted.