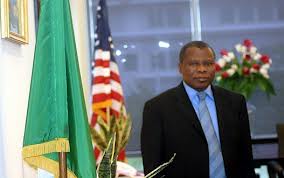 Earlier, Christian Association of Nigerian-Americans demanded an official apology from the politician. Now, it’s Nigeria’s ambassador to the United States turn to insist that Senator Ted Cruz should apologize for comments in which he joked that it seems like “Nigerian e-mail scammers” have been running the dysfunctional US Healthcare website.

Ambassador Ade Adefuye suggested that the Texas senator made the remark to appeal to prejudiced opponents of US President Obama.

“It is unfair of any senator to essentially use citizens that are law abiding, to use Nigerians as cannon fodder,” Adefuye said. “Many people from Nigeria are making meaningful contributions to American society, and Nigerians are very law-abiding and making contributions to their host community.

“We recognize that we have efforts on the part of Senator Cruz to appeal to some animus in his domestic base,” he added.

He said Cruz’s comments were “completely over-the-top,” “went too far,” and had angered Nigerians.