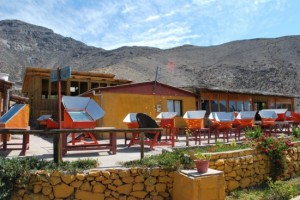 The people in Villaseca, Chile are some of the most eco-conscious on the Planet, using only sun-powered ovens to cook all their food. With these ovens, which can generate temperatures up to 180 degrees Celsius (356 degrees Fahrenheit), the villagers can prepare all kinds of dishes, including vegetables, meats and even deserts.

At first, cooking with solar energy was a necessity, due to the scarcity of wood in the country, which forced the villagers to spend hours on end every day looking for wood so they could eat. Two decades ago, the poor people of Villaseca were facing a tough wood crisis because of the desertification of the region. Every day, one member of the family had to go looking for wood to burn in their ovens so they could cook and eat warm meals. Thankfully, Rojas, a woman who lives in the Elqui Valley, and four other women were chosen to be guinea pigs in a trial project involving solar energy, conducted by the University of Chile. They were given specially engineered ovens that captured the sun’s rays and allowed any kind of food to be cooked in a heated compartment. The idea was well received, since the arid region is extremely sunny with more than 300 days of sunshine every year. Now, their sustainable ovens are the area’s main attraction and, the people there eat healthier because sun-cooked food lacks the carbon dioxide that emanates from burning wood.

The women tested the ovens for four months and the experiment was a success – tasty, edible food could be prepared using only solar energy. But, after the experiment was over, the University demanded the villagers give the contraptions back. Faced with the scarcity of wood, and fossil fuel being very expensive, Rojas and a few other villagers from the dry town decided to raise money and buy the ovens for themselves. However, the sun-powered appliances were far from perfect; their position had to be adjusted very frequently so they caught enough sunshine to actually cook. Thus, Rojas and her husband spent years designing and redesigning the initial ovens until they came up with more efficient devices. The couple, along with other Villasecan families, then founded the Association of Solar Artisans of Villaseca and received a $10,000 grant from the United Nations Development Program to open a unique restaurant where food would be cooked only using their new solar ovens.

In the beginning, the aptly named Delicias del Sol restaurant could feed only 24 customers at a time but as word about the new delicious sun-made food got out, the association was able to expand. Their eco-friendly restaurant  can now make food for 120 hungry diners, many of whom come from distant places just to try their delicacies. And they all seem to enjoy it very much. One customer from New Zeeland said that the food at Delicias del Sol was the best he’s had in Chile. “Before we ate a lot of oils and fats, but since you can’t fry in these ovens, our diet is much healthier,”Veronica, Rojas’ daughter, says. Moreover, because there are no flames involved, cooking in the solar ovens does not pollute at all ,as there is no smoke.