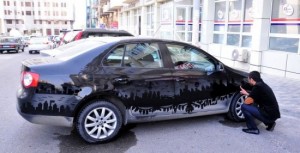 For most artists, any surface can be used as a canvas, as this Azerbaijani man beautifully demonstrates by creating complex urban landscapes in the collected dust on cars. He discovered his talent and passion for drawing in dirt at his job as a parking attendant which he has been doing for over 10 years.

During work hours on one of the busiest streets of Baku, Azerbaijan’s capital, parking attendant Rafael Veyisov wipes off the dust on cars with his fingers, slowly contouring the shapes of tall buildings and flying birds. In his artwork, he generally illustrates real towns to educate people about other countries, but sometimes he also lets his imagination run wild and produces impressive original works. Surprised by his talent, the car owners who regularly leave their vehicles in Rafael’s care, often leave them dirty just to give him an excuse to play around, and take photos of his beautiful artworks.

Rafael Veyisov isn’t the only one using dirty cars as an art medium. Scott Wade, who’s awe-inspiring masterpieces we covered a while back, has made a name for himself by turning filthy cars into beautiful works of art.

As amazing as his dusty car art is, I wonder if Rafael ever got in trouble with any of the vehicle owners. Where I come from most people would accuse him of scratching the paintwork.