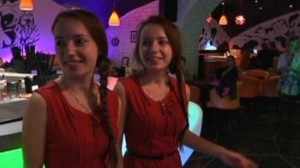 A restaurant owner in Moscow promises you will have such a great time in his establishment that you are going to see double, not because of the strong vodka, but because the staff is made up exclusively of identical twin brothers and sisters.

Aptly called Twin Stars, the Russian restaurant employs only twin bartenders and wait staff as a gimmick to attract more customers and prides itself on being the only such restaurant in the world. Alexei Khodorovsky, the owner of Twin Stars, says he was inspired by a 1960s movie where a girl finds herself in a parallel universe and discovers there’s another version of her – her twin.

The idea seems fun and both the customers and the twin staff say they’ve enjoyed the experience thus far. “We worked as barmen before this summer in a different establishment. It was an internship for us,” Artyem, who works with his identical brother Roman at the bar, says. We really liked that internship.

That’s why we decided this profession suits us and we came here to work.” Finding people like Artyem and Roman was a true challenge. Identical pairs with experience working in a restaurant were very hard to track down, but the effort was worthwhile because as Nika, another member of the unique staff, says “One pair (of twins) is already fun – when there are two, it’s even more fun.”