A Florida gas station clerk survived a robbery and shooting Monday morning when the smartphone in his pocket stopped a bullet. 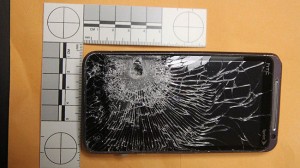 A man entered the Orange County Hess gas station Monday morning, pointed a revolver at the cashier and ordered him to open the safe, said the Winter Garden Police Department.

The worker couldn’t get the safe open. A second clerk entered, and the gunman had him try his hand at it.

When he too was unsuccessful, the would-be thief fired a single shot at one of the employees, striking him in the upper abdomen, and fled the store.

“When it first happened, he checked himself to see if he was shot. He didn’t see anything,” Allen said. “Sometime later after the police were on the scene, he mentioned he had a little bit of chest pain. So they started looking into it and realized his cellphone had been shot.”

The clerk suffered only minor injuries. His HTC Android phone in his front-shirt pocket stopped the bullet.

— With files from Reuters