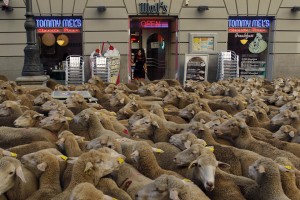 Shepherds led a flock of 2,000 sheep through Madrid on Sunday in defense of ancient grazing, droving and migration rights increasingly threatened by urban sprawl and modern agricultural practices.

Tourists were surprised to see downtown traffic cut to permit the ovine parade to bleat — bells clanking — across some of Madrid’s most upmarket urban settings.

Since at least 1273, shepherds have had the right to use droving routes that wind across land that was once open fields and woodland before Madrid mushroomed to the great metropolis it is today.

Every year, a handful of shepherds defend that right in Spain’s capital city. Following an age-old tradition, they paid 25 maravedis — coins first minted in the 11th century — to city hall officials to use the crossing.

Shepherds have a right to use around 78,000 miles (125,000 kilometers) of ancient paths for seasonal livestock migrations from cool highland pastures in summer to warmer and more protected lowland grazing in winter.

The movement is called transhumance and in Spain up until recently involved close to 1 million animals a year, mostly sheep and cattle.

Modern farming practices and the use of faster road transport are increasingly confining animals to barns or trucks, because shepherding is costly and time-consuming, according to the Ministry of Agriculture, which has promoted the colorful annual Transhumance Fiesta in Madrid since 1994.

Spaniards are proud of their centuries-old sheep rearing traditions and hold the native Merino breed of sheep in high esteem.

Merinos have gone on to form the backbone of important wool industries in places such as Australia and South America.

Madrid became an important urban center when King Philip II chose it as the capital of his vast empire in 1561. Some paths have been used for more than 800 years and modern-day Madrid has sprawled to engulf two north-south routes. One that crosses Puerta del Sol — Madrid’s equivalent of New York’s Times Square — dates back to 1372.