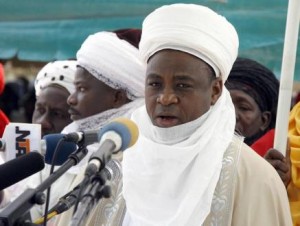 The Sultan of Sokoto, Alhaji Muhammad Sa’ad Abubakar III, Tuesday called on perpetrators of violence in the North to stop killing in the name of religion.

The sultan, while receiving in his palace in Sokoto a delegation led by a former Head of State, Gen. Abdulsalami Abubakar, said Islam abhorred the killing of innocent people without following due legal process.

According to him, the senseless killings of innocent citizens by insurgents was un-Islamic and should stop forthwith.

The Sultan added that such killings have nothing to do with Islam and as such, the Sultanate Council dissociated itself from those perpetrating such dastardly acts.

“Islam abhors killing of innocent souls unless through legal process where the court has sentenced an individual to death for a crime committed in line with Islamic law.

“So, I am calling on those perpetrating such killings in the name of Islam to stop such nefarious acts because what they are doing has nothing to do with Islam and we therefore, dissociate ourselves from such dastardly acts,” he said.

The sultan also stressed the need for Muslims to learn to live peacefully with their Christian brothers for peace to reign in the polity.