Sure Boys: 3 Band-Boys From Yinka Ayefele’s Band Go Missing In The US 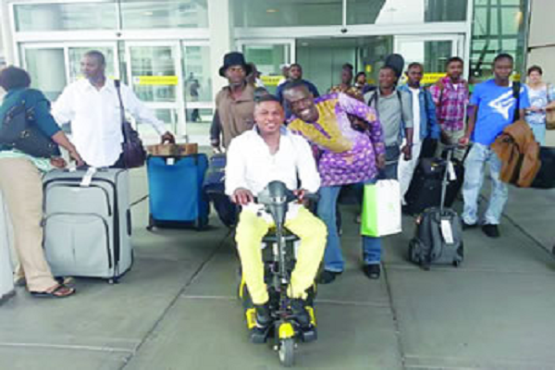 Famous gospel/secular singer, Yinka Ayefele left Nigeria on September 2nd to the US, like he usually does, to perform live on stage for his fans.

Well, something different happened this time, as Yinka Ayefele left the shores of Nigeria with a 14-man band for a six-week musical tour of the US, which took them to New York, Washington, Houston, Atlanta, Baltimore, Maryland and Dallas but only returned with 11 band members.

Yinka returned to Nigeria this week but 3 of his band members went missing and the singer had to return to Nigeria without them.

The three missing men according to a petition filed by Ayefele are:

1. The lead vocalist of Ayefele’s Merry-Makers Band, Solomon Motimoke popularly known as ‘Yatty’ who dumped the band while they were in Washington DC on 11th October.

3. Olusola Kayode Isaac (vocalist), who disappeared at the La-Guardiala Airport, New York on Monday, 14th October on his way from Houston.

Yinke Ayefele has written to the US Homeland Security, asking them to track and deport these men.

Actress Anita Joseph is set to walk down the aisle with her lover, MC Fish, on the 14th of February 2020. The curvy actress and...
Read more
- Advertisement -