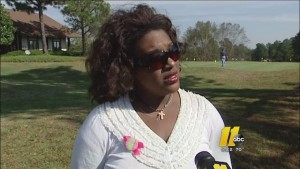 A biology teacher was fired after letting students re-use needles in a blood experiment.

WRAL reports that on Oct. 24, biology teacher Miyoshi McMillan, who taught an honors version of the class at Overhills High School, conducted an experiment where students could check their blood type after pricking their fingers with a needle — or lancet — drawing blood. Students were then told to rub down the needle with alcohol before letting fellow classmates re-use them.

Students who chose not to do the blood test experiment were given an alternate assignment to write a five-page paper, according to the Fayetteville Observer. One concerned student instead left class to call her parents, who immediately alerted the assistant principal.

The teacher was fired by the end of the day, but told WTVD that she was set up to fail.

“I believe it’s really been blown up and it’s been a character strike against me,” McMillan told the station.

McMillan, who had been working as a teacher since 2009, was a lateral-entry teacher at the time of her firing, according to Patricia Harmon-Lewis, spokeswoman for Harnett County schools.

Lateral-entry teachers have an expertise in the field they teach, in this case biology, but must still obtain a North Carolina teacher’s license. She was a first-year teacher at Overhills High School.

“The staff should know not to do those things in classes,” Harmon-Lewis said. “That is why she is no longer employed with Harnett County schools.”

McMillan said she believes that if she was not supposed to use the blood testing kit, then it should not have been in the classroom.

“From my understanding, I thought, ‘Well, it’s OK to use [a lancet],” McMillan said. “It’s there, if it was not OK to use, then I think it should have been taken out during the summer.”

A letter from the school was sent home to parents suggesting that all 16 students who participated in the experiment get their own blood tested by a doctor to make sure it wasn’t affected.

“The kids did not get a straight needle put into them,” McMillan said. “I really believe that the children will be fine.”

Now that she has been fired, the ex-teacher said she has enrolled in a Ph.D. program and will be just fine.