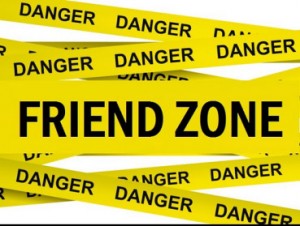 Often referred to by guys as the “Death-Zone”, the friend-zone is a status in your relationship with a girl where she has instantly removed you from her dating interest, but still has a close connection with you as a friend. It is only referred to as the friend zone when the guy does not reciprocate these feelings and definitely likes the girl involved and wishes she would date him. The friend-zone is a horrible place to be in and getting yourself out of the friend-zone is said to be just about impossible. Here are 3 ways to know she has made this very decision about you.

3. She is sharing personal information with you before any physical connection was made. Obviously if you two are already actively kissing, holding hands, ect.. then these personal feelings are because she trusts you as a partner in a relationship. If you’re starting to get these deep, personal feelings before any real connection has happened, you’re in the friend-zone. Sharing personal stuff like this leaves a girl vulnerable and allows you to make opinions about her she would not want you to make outside of a relationship that she was interested to share with you. This is a good key in knowing that she has ruled you out of her future dating career.

2. Sincere Guy Advise. I say sincere only because some girls will mention or talk about her and some other guy to try to make you jealous or to let you know that she’s actively with other guys in order to intrigue your interest. On the other hand, sincere guy advise when you can see that she is very much in love, or passionate about this other guy is a red flag to the friend-zone. You’ll be able to see it in her eyes or her actions whether or not it is sincere or not. If she’s asking you for dating advise and she’s seeing this other guy, turns out this is very much sincere and you’re deep in the death zone, buddy. An example of her not being sincere would be like, ” So Jason asked me out for dinner. Do you think I should go?” She’s definitely into you!

1. You went for it. So you thought you were in the friend zone and went for it as far as revealing your emotions and feelings towards her…. and she said no? You’re done. Forever. This is the cement to the friend zone that you will never break. Once you’ve established that you like her and she has responded letting you know she doesn’t feel the same way or you got the “We should just stay friends”, she now has the upper hand and she’s never letting go. Now it’s established that you like her more than she likes you and both of you know it and now both of you know that both of you know it. Game over.