The National Leader of the All Progressives Congress, Senator Bola Tinubu, on Tuesday led top shots of the party to begin the governorship campaign of Senator Chris Ngige for the November 16 poll in Anambra State. 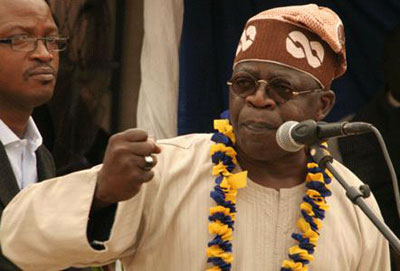 Other notable leaders of the party that addressed thousands of the party supporters at the Basilica of the Most Holy Trinity, Onitsha, were Governors Kayode Fayemi (Ekiti);  Adams Oshiomhole (Edo) and Rochas Okorocha of Imo state..

The rally coincided with the coronation festival of the Obi of Onitsha, Igwe Nnaemeka Achebe.

Both events created serious vehicular bottlenecks in the city that slowed down social and business activities for many hours.

Tinubu, waving the broom -the symbol of the APC- declared that the time had come for a change in Anambra State.

Amid cheers of “Asiwaju! Asiwaju”, the former Lagos State Governor called on the people of Anambra State to key into the change that was blowing across the country and vote in an APC governor in the person of Ngige.

Fayemi said Anambra, like his own state, was peopled by highly educated people and should therefore should vote in a technocrat, who would bring to them the kind of transformation that was taking place in Ekiti, Lagos, Edo, Imo and other APC states.

Oshiomhole said with the huge crowd at the venue of the rally, Ngige did not need any other advertisement to win over the voters.