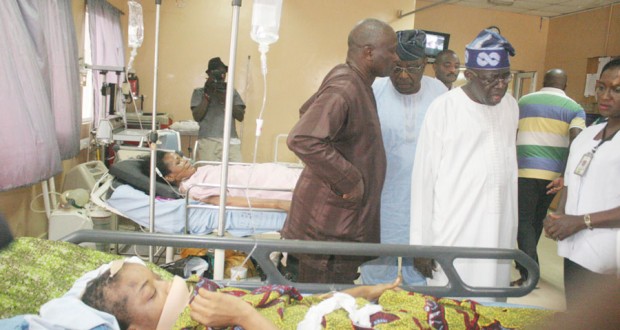 Former Lagos State governor and one of the leaders of All Progressives Congress, APC, Asiwaju Bola Ahmed Tinubu, who returned to the country yesterday, shortly after his rousing welcome, visited the survivors of last week’s Associated Airline plane crash at the Lagos State University Teaching Hospital (LASUTH), where they are currently receiving treatment.

Tinubu was accompanied on the visit by his wife, Senator Oluremi; the interim national publicity secretary of the APC, Alhaji Lai Mohammed; Speaker of Lagos State House of Assembly, Mr. Adeyemi Ikuforiji and other party stalwarts.

The former Lagos governor spent some time at the ward visiting the patients.

He described the death of the former Ondo State governor, Dr. Olusegun Agagu, whose coprse was being transported to Akure for burial when the plane crashed shortly after take-off from the Murtala Muhammed Airport, Lagos, as a great loss to the country just as he described Agagu as a good man he will miss despite their partisan differences.

He said Nigerians should give thanks to God for sparing the lives of Agagu’s son, Feyi; and the son-in-law, Femi Akinsanya, in the crash, noting that government needs to fix the corruption and rot in the aviation sector.

Speaking in an interview on arrival at the airport, he described the crash as a national disaster, and called on the Federal Government to urgently overhaul the aviation sector.

Tinubu said, “Agagu was a committed family man. Tunji (Okusanya) was a close friend of every one of us. But God has done one thing, has shown us His wonders. In the midst of all of these, Feyi Agagu survived, his brother in law survived.

“He has given room for us to give thanks to God. Nigeria’s aviation sector is a risk, we have never allowed professionals to run the Aviation industry, and we created too much bureaucracy. Where are the professionals, where are the engineers? What is the age of the plane and the records of maintenance? But when they have already compromised the office, they waste our valuable lives and time.”