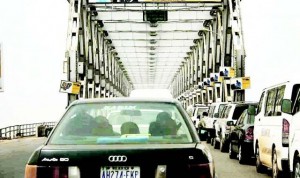 Two persons have died on top of the Niger Bridge, Onitsha, Anambra State following a heavy traffic jam on the bridge.

The victims, a middle-aged man and a little child, were said to have died due to exhaustion arising from the long hours spent in their vehicles while trying to cross the Niger Bridge.

The deceased whose identities were not immediately known, according to Vanguard sources, was a minor who was coming back with his mother in a commercial bus from Lagos, while the second victim, was a trader who travelled all the way from the North to Onitsha to sell his goods.

It was learnt that while the small child died instantly on her mother’s lap at the Bridge, the business man died minutes after crossing the bridge to Onitsha from the North. It was alleged that the child had cried for a long time due to heat in the vehicle while waiting to cross the bridge before the mother eventually discovered that her child was no longer breathing.

The bewildered mother was said to have become hysterical as she burst into tears running helter-skelter when she discovered that her child whom she thought fell asleep was actually dead. The trader was also said to have boarded the vehicle from the North and travelled smoothly until the Asaba end of the Bridge where they spent several hours under the scorching heat in an attempt to cross the Niger Bridge. An eye witness account said that the victim and other passengers with him in the vehicle had already crossed the bridge and was offloading his goods from the vehicle when he suddenly slumped and died.

The Federal Government had repeatedly promised in the last 10 years to build a second Niger Bridge to ease traffic congestion on the bridge which is the gateway from Lagos and other South-west states to the South-east and South-South. [Vanguard]