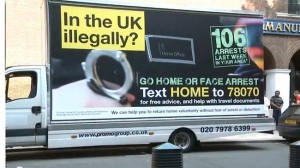 Britain has sent text messages to almost 40,000 illegal immigrants warning them they have no right to remain – although a handful of legal residents were also caught up in the campaign.

“Message from the Home Office. Our records show that you may not have leave to remain in the UK. Please contact us to discuss your case,” the message said.

Similar messages were also sent out via email and by post as part of a “proactive” effort to contact individuals who had no right to be in Britain, he said.

“We believe it is right to enforce the immigration rules,” he said.

But a few of the text messages were sent to the wrong recipients, including to anti-racism campaigner Suresh Grover, who told The Independent newspaper he was “absolutely shocked and quite horrified”.

“I came here with my parents in 1966, I was born in East Africa and have always had a British passport,” he said.

Immigration advisor Bobby Chan said he had also received a text despite having lived in Britain since 1973.

“These kind of practices stereotype immigrants as a criminal community and create an atmosphere of fear,” he told the paper.

The Home Office spokesman said the private contractor responsible for the text campaign had acknowledged 14 texts were sent in error, “a tiny, miniscule number”.

The opposition Labour party condemned the campaign as a “gimmick” that risked offending and alienating its own citizens. [AFP]