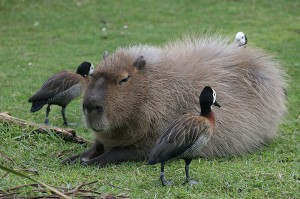 A British scientific expedition to a remote rainforest in Papua New Guinea has discovered a new species of giant rat.

The Bosavi woolly rat is the size of a small domestic cat, weighing about 1.5 kilograms and measuring 82 centimetres in length from its nose to its tail.

It was discovered in the crater formed by the extinct volcano, Mount Bosavi.

Experts say the rat is the same as those found in any city’s sewers, only bigger.

Gordon Buchanan set up the infra-red camera which provided the first images of the animal.

“This is the biggest true rat in the world – unbelievable,” he said.

“It’s actually so big it doesn’t look like a rat … it just is incredible. This is a really significant find for the expedition.”