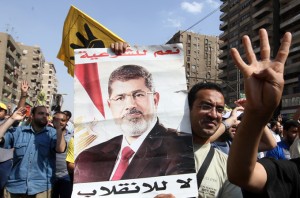 Deadly clashes with security agents on Sunday was not enough to stop anti-government protesters as they were out in hundreds on Tuesday, chanting “Down with the military government” outside Cairo University.

Supporters of deposed President Mohamed Morsi had urged university students to protest against the army following the violence on Sunday, one of the Egypt’s bloodiest days since the military ousted the Islamist leader on July 3.

State media said 57 people were killed on a national holiday that marks the start of Egypt’s 1973 war against Israel.

“We are here standing against the coup,” said Enas Madkour, a 19-year-old fine arts student at the march near Cairo University, where security forces had parked two tanks and blocked the main road with barbed wire. “I’m against Morsi but I’m not for people killing others and I’m not for the military government we have now.”

Other students dismissed those views, however. “Sisi is a hero and there’s no one like him,” said Rania Ibrahim, 18, referring to General Abdel Fattah el-Sisi, the defence minister who led Morsi’s ouster.

Meanwhile crackdown on Muslim Brotherhood continues as Egypt’s cabinet, Tuesday, ordered authorities to remove the Muslim Brotherhood from the list of approved non-governmental organisations following a judicial order, according to state media.

The move comes after an Egyptian court last month banned the Muslim Brotherhood from operating and ordered its assets seized, amid a massive crackdown on the group following the military ouster of Islamist President Mohamed Morsi.

In its September 23 ruling, the court had also banned “any institution branching out from or belonging to the Brotherhood”.

The Brotherhood is appealing that decision, with a court date scheduled later this month, so Tuesday’s decision by the cabinet was an unexpected strike against the group.

The Brotherhood’s NGO was registered in March, while Morsi was still in power. It was set up as one of the two main legal faces of the Islamist group, which was outlawed for most of its 85-year existence.