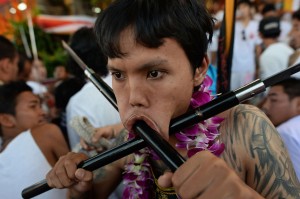 These shocking pictures show the extreme religious rituals which take place at the Vegetarian Festival in Thailand.

The festival, in the southern Thai town of Phuket, lasts for the first nine days of the ninth lunar month for the worship Chinese gods.

Religious devotees slash themselves with swords, pierce their cheeks with sharp objects, walk on coals and climb ladders made of blades to purify themselves, taking on the sins of the community.

It is believed that these acts will bring them good fortune, and that the Chinese gods will protect them from harm.

Though the origins of the festival are unclear, it is commonly thought that the festival was bought to Phuket by a wandering Chinese opera group who fell ill with malaria while performing on the island.

They decided to adhere to a strict vegetarian diet and pray to the Nine Emperor Gods to ensure purification of the mind and body.

To everyone’s amazement the opera group made a complete recovery.

The people celebrated by holding a festival that was meant to honour the gods, and that has continued.

Observers follow a strict 10-day vegetarian diet to be cleansed spiritually before performing these brutal rituals. 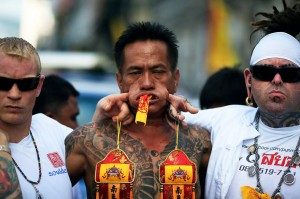 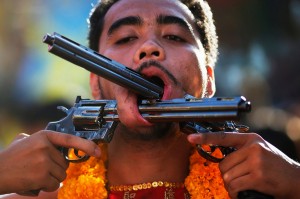 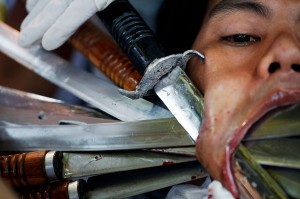