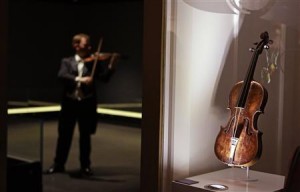 A violin that was being played as the Titanic went down was sold for 900,000 pounds ($1.46 million) at auction on Saturday, a record price for memorabilia from the doomed ocean liner.

Band leader Wallace Hartley played the instrument, trying to calm passengers as the ship slipped into the frozen waters of the North Atlantic in April 1912 after colliding with an iceberg during its maiden voyage from Southampton to New York.

Hartley’s band played the hymn “Nearer, My God, To Thee” as passengers climbed into lifeboats. Hartley and his seven fellow band members all died after choosing to play on. More than 1,500 people died.

When Hartley’s body was recovered more than 10 days after the disaster, the violin was found in a leather case strapped to him, according to the folklore that has grown up around the event.

It was given back to Hartley’s fiancée Maria Robinson in England, and, after she died in 1939, it was donated to her local Salvation Army band and later passed on, eventually to the current owner, whose identity has not been disclosed.

A silver plate on the German-made violin is engraved “For WALLACE on the occasion of our ENGAGEMENT from MARIA”.

On sale with its case initialed W.H.H, the violin had a guide price of 300,000 pounds, Chrissie Aldridge, of auctioneers Henry Aldridge and Son, said.

“It is a record,” she told Reuters after the sale. Asked who had purchased the violin, she would only say: “A British collector.”

Rediscovered in 2006, it took specialists such as forensic science experts years to authenticate the instrument.

However some people still doubt whether the violin is genuine, believing it could not have survived being submerged in sea water.

The auction house said it had attracted interest from collectors all over the world. More than 300,000 people viewed it during a three-month exhibition in the United States.