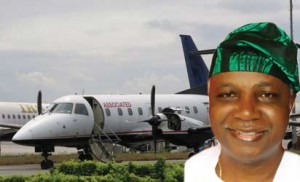 Following a statement by the government of Ondo State debunking reports it hired the ill-fated Associated Airlines plane which crashed while conveying the corpse of former governor of the State, Olusegun Agagu to Akure for final burial rites, family of the late politician, yesterday, insisted that the choice and hiring of the ill-fated plane from Associated Airline was not that of the family.

In what is gradually turning into a media war between the Agagu family and the Ondo State Government, the family through the late former governor’s brother, Femi Agagu said the family had no interaction with the airline.

According to Agagu family: “Playing politics with facts and the memories of the departed souls as well as the sensibilities of the bereaved families is totally and absolutely unnecessary.”

Femi Agagu, in a statement in Akure, said that “we would like to stress again and again that the choice and hiring of the ill-fated plane from Associated Airline was not that of the family.

“Indeed the family had no interraction whatsoever with Associated Airlines.

The family said that “the choice of MIC undertakers was a collective decision of both the government and Agagu family in view of MIC’s status as one of the best undertakers in the country.

“The contracts for the purchase of the casket, the hiring of the hearse, arrangement for the flying of the corpse from Lagos to Akure, the planning of the lying-in-state as well as the transportation to Iju Odo were strictly between Ondo State Government and MIC.

“The family had no business or direct interaction with MIC. As a matter of fact, the letter from MIC inviting us to come and pick the casket was routed through the Ondo State government.

“As had been said severally, the only role performed by the family was to, on the invitation of the government to point at the casket we wanted.

“How much it cost and how much was paid as well as how the money was paid remains between the state government and MIC caskets.

“Sincerely, there ought not to be any controversy over this matter as Associated Airline knew and has the records of who contracted them for the chattered flight,” the family said.