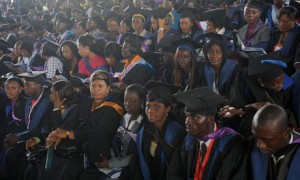 The Vice Chancellor, Federal University of Technology, Akure, Prof. Biyi Daramola, says Nigerian graduates are unemployable due to the lack of self discipline and commitment to vigorous academic pursuit.

Daramola said this in a lecture entitled; “The Role of Science and Technology in Human Resource Management”, he presented at the Afe Babalola University, Ado Ekiti, on Thursday.

He spoke at a forum organised by the Chartered Institute of Personnel Management of Nigeria.

The Professor of Agricultural Economics said it was regrettable that many Nigerian graduates could not secure jobs after years of applications.

He said that the lack of exposure to science and Technology was also a major factor responsible for their plight.

The vice chancellor said it was high time the country’s education curricula be fashioned in a manner to make mathematics compulsory for all courses at all levels.

This, he said, would boost students’ interests in science and technology from their tender ages.

Daramola urged governments to ensure proper funding of science and technology at all levels of the academic cadre, adding that “they should also help in the establishment of monotechnics and polytechnics or universities of technology that would expose students to skills acquisition.

“Over the years, Nigerian education policies have recognised the importance of science-based courses in the nation’s education curricular and thus pursued the policy of giving more attention to science-oriented courses during admissions into the nation’s tertiary institutions.”

He said that the empahasis on science and technology would facilitate the actualisation of the country’s desire to join the comity of developed economies by the year 2020.

In her remarks, the Ekiti State Deputy Governor, Prof Modupe Adelabu, who was represented by the Commissioner for Education, Mr Kehinde Ojo, said the distributions of 48,000 laptops to students and teachers, as well as renovation of all schools by Gov. Kayode Fayemi-led administration underscored the importance placed on education.

The President/Chairman of Council, Mr. Victor Famuyibo, who was represented by the Registrar/Chief Executive Officer

of the Institution, Mr Sunday Adeyemi, pledged that the council would continue to live up to expectations in its

commitment to the management of human capital for maximum productivity. [NAN]