Eighty-one-year-old retired matron, Mrs. Florence Fashola, has done something many senior citizens will dare not do. In preparation for her death, she has dug her grave and sewn a shroud. In this interview, she gives her reasons for doing so. 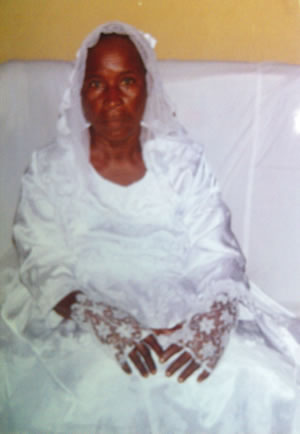 Do you think many people are dying young these days than in the old days?

Yes, of course. The problem is that young people are no longer doing what we did in those days. They no longer live the way we lived and eat the way we ate. For example, our parents never ate pepper milled with machines. They never put seasonings in their soup. They ate fresh fruits and fresh meat and fish. My mother never did before she died. She would not eat any soup if the ingredients were not milled on a stone. People eat too many packaged things nowadays. The luxury in which people live nowadays contributes to early death. But that does not mean I am not prepared for death. I have been ready since I clocked 70.

But many old people are afraid of death. Why are you not?

When I was 70 years old, I had a meeting with my children and told them I was expecting death anytime from then because even the Bible says nobody knows the time or day death will come. I have been blessed by God; I have children who have children of their own. I am not afraid of where I am going. So, why would I be afraid of death? To show I was really prepared, I held a meeting with my children and told them of my decision to find a tailor to sew me a shroud I would be interred in and dug my own grave in my yard. When the shroud was sewn, I put it on and took photographs with it.

You did that? Not many people have the heart to do that.

Yes, of course. When I informed them, they even threatened to get the tailor who would sew the shroud arrested. But I already made my decision. If I pass away today, all they would need to do is buy a coffin.

Was the decision made just because you were not afraid of death?

Well, not totally. There was this couple who were my friends. Before the husband died, he had given the instruction that he wanted to be buried in his house in Lagos and had even prepared his wife’s grave beside his. But seven years after he died, his wife died as well. The children exhumed the man’s body and took it along with the wife’s to Owo, his hometown. I did not like that idea at all. When I got back from the burial, I immediately held a meeting with my children and told them of my decision to prepare my place of burial ahead of time. I moved to my house in 1977 and retired as a matron in 1978. I was once told that this house would be my ‘Goshen’. Things have happened around me in this area since then that have shown that God has given me tremendous grace. So, why should I not want to be buried here?

You seem to remember dates so easily; do you keep written records like some elderly people do?

It is simply God’s grace. I can remember the dates of every major event that has happened since my father died in the 1940s. I know that having the ability to remember dates is a special grace God has given me. Some old people in my age group cannot even remember what happened yesterday.

Can you remember any other instance where children exhumed their parents’ bodies to be buried somewhere else or buried them where they did not want?

None other than the one I have told you readily comes to mind. But I have heard of such things. It is not a good thing on the part of the children of such people at all. I don’t know why some children cannot respect the wishes of their parents even when they are dead.

But what if your children do the same?

My children? They dare not. Every year end and every September during my birthday celebrations, I repeat my demands to them. I ring it in their ears so that they would not disobey me when I am dead. I have found where I want to be buried. I have prepared the place. All I ask of them is to respect that and let me be laid to rest there.

And what if none of your children lives in this house after you are buried?

Does a dead person know what goes on in his or her house? I care less about that. I cannot force my children to live in this particular house where I will be buried. They have all got to high places in life and are free to live their lives the way they want. When I am gone, I am gone. All I want is to be buried here. My request is not that they must come and live in this house, only that they should bury me here. Will they now exhume my body after I am buried or take my body after I am dead to Owode? That will not happen because that will show they do not respect my wishes.

You said a lot of things have happened around you that have shown this place is your ‘Goshen,’can you tell us some of those things?

There is a house on this street, the landlord committed suicide by hanging. There are some of my neighbours, who are barely 70 years old but have become senile. The house across me over there, many different people from different tribes have lived there and the house has seen many deaths. I am not thanking God for their woes. God knows I was genuinely sympathetic when those things were happening. I see this house as my Goshen as I was told because apart from my mother who died, this house has never seen death. None of my tenants has experienced any bad incident. So, I know God planted my root here as a place of grace for me.

Did you buy your parents’ coffins or prepared their graves in advance?

Let me first explain how my mother died. My mother had 14 children, but only five survived her. She fell ill on January 11, 1976, and I thought she was about to die. I had to go and buy a coffin and a shroud and prepared where she was to be buried even though we had not actually dug the grave. But five days later, she was up and about. She requested for fresh fish, which we prepared and she ate. She said God had healed her. So we had her coffin before she died. In May of the following year, my mother told me she needed to ‘go home’. But I said no way, you have to carry your grandchild before you go anywhere. She then said she would wait a little longer but that she was already seeing her dead relations.

The morning my first child gave birth, she named the child. She said whatever other name the child was given, the name she had given the baby must come first. She suddenly went quiet but we revived her. She then prayed for everyone. She died a couple of days later.