A ten-year-old boy, Xiao Jun had his hand cut off and thrown in a pot of boiling water by his mother’s boyfriend following a dispute over money. 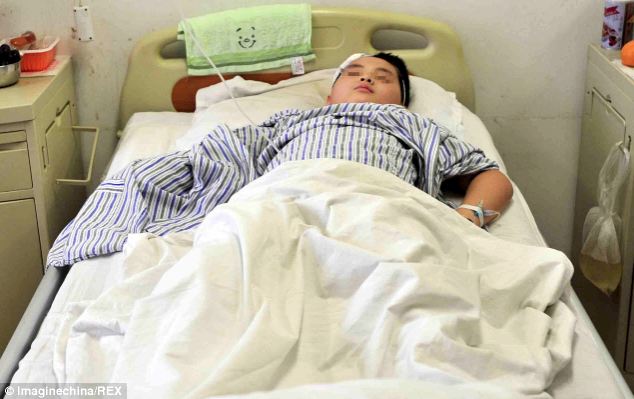 The incident occurred in Shenyang, Liaoning province in China.

According to report, the accused, Cheng Sun had met the boy’s mother, Xiao Shen last year and they were to buy a flat together.

They were however living together in a rented apartment while searching for a new home.

Shen who is reportedly pregnant had gone visit her family in the hope of borrowing money from them to help acquire the new home but things didn’t go well. She then called Cheng to tell him there was a delay in getting the money.

That was when Cheng got angry and unleashed it on the little boy.

The victim was said to have been beaten with a stick by Cheng who later grabbed a meat cleaver, cut off his right hand and threw it into a pan of boiling water so that it could not be reattached. He later called the police to report what he had done

Xiao was taken to hospital after but surgeons were unable to reattach the hand because it had swelled up so badly in the boiling water. He is now faced with having to be fitted with an artificial arm.

Xiao told the police, “I always thought he would really be a good dad to me, I liked him. Now everything is ruined. I don’t know why he did this, he just seemed to become someone else”.

The boy is said to be in a stable condition after the surgery.

Cheng has been arrested by police.
Source: Dailymail