The truth may set you free, but not if you call police to tell them you’re “just too damn drunk.”

That’s what police in Billings, Montana, say Carol Frances Omeara did after allegedly downing a pint of liquor on Oct. 8. 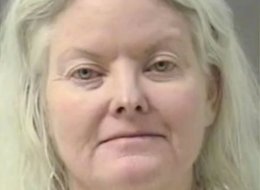 Omeara, 55, was arrested after a police dispatcher received a call from a woman later identified as Omeara. She said she could not get out of her vehicle, which was parked outside her residence.

When she was asked if she was having a medical or mechanical issue, she allegedly explained, “No, I’m just too damn drunk,” the Billings Gazette reported.

The responding officer found Omeara inside her car, which was parked about two feet from the curb in front of her house.

She told the officer that she had driven home four hours earlier, after downing a pint of vodka at a bar earlier in the evening, the Missoulian reported.

Omeara agreed to a breathalyzer test and the result allegedly showed she had a blood-alcohol level of 0.311 percent, almost four times over the legal limit.

Omeara was taken to jail and later charged with DUI, the Metro reported.

She has been convicted of DUIs three times in the past.