A Chinese woman has revealed she was dragged from her home in the middle of the night and forced to have an abortion, three months before her child was due to be born. 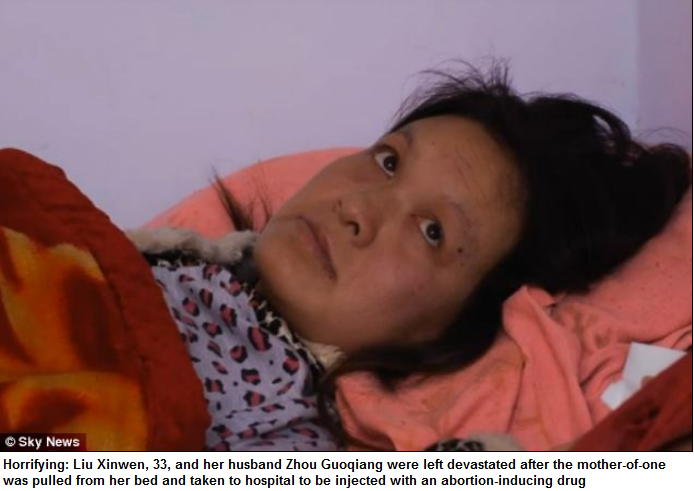 Liu Xinwen, 33, and her husband Zhou Guoqiang were left devastated after the mother-of-one was pulled from her bed and taken to hospital to be injected with an abortion-inducing drug.

The forced abortion is due to China’s strict one-baby policy, introduced in 1979 to keep the country’s population under control – the couple already have a son.

‘I didn’t get to see him. I would be even more upset if I had seen him,’ she said.

Mr Zhou claims his wife was forced to sign papers which said she had agreed to the abortion.

He said that when she refused she was told if she did not co-operate her husband would be arrested and she would be left with nothing.

Liu Xinwen told Sky News that after her son was born she had a contraceptive coil inserted, a procedure proscribed by China.

She said it must have failed and she discovered she was expecting a second child when she was four months into the pregnancy.

The couple decided against informing the authorities as they feared a forced abortion and instead hoped to pay a fine after the birth – this is sometimes acceptable in parts of China.

It is not clear how authorities found out Liu Xinwen was pregnant.

The fine is levied on parents who break family planning laws and can be up to 10 times a family’s annual income.

A child without a hukou faces problems registering for education, health care and government benefits.

Known to many as the one-child policy, China’s actual rules are complicated.

The government limits most urban couples to one child, and allows two children for rural families if their firstborn is a girl.

Numerous other exceptions include looser rules for minority families and a two-child limit for parents who are themselves both singletons.