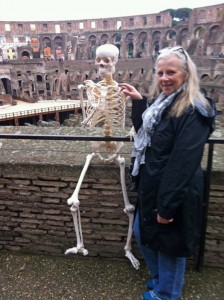 Being a medical skeleton is pretty boring. You sit in a room all day, dust piling up in your orbital cavities, waiting for some know-it-all students to come and examine you and sometimes even tease you about your bones not being real. If only you could go out and explore the world outside the University walls. One happy anatomical correct model called Sam, got the chance of a (after) lifetime thanks to Susan Weese, who took her (yes, Sam is a “she”) on a yearlong trip around the world, immortalizing their visits with a photographic camera. Together, the odd pair have visited Venice, Pairs, Rome, New York and many other exciting tourist destinations.

The world tour began on November 1 – also known as Day of the Dead, last year and was entitled “Sam 365.” Susan’s idea came to her on Halloween, after driving around with a skeleton – other than Sam –  in the passenger’s seat. Fellow fright lovers on the motorway honked their horns, showing Weese their appreciation for the unusual idea. Susan, who worked on medical illustrations 30 years ago, carried the 42lbs skeleton everywhere she went on the trip but it was not an easy task. “Sam is 42lbs and if I carry her in my arms I get bruises everywhere,” the woman explains.

Traveling with a skeleton can be problematic in airports, as well. “She flies over sized, which is hard getting through airports. She got held up by the Department of Agriculture in Newark because they had to make sure she was not real bone.” Nonetheless, the ambitious woman is determined to take the model everywhere. “The only day I could take pictures when we were in New York was a cold, rainy and windy one. Carrying her across Brooklyn Bridge was no easy task,” Susan says.

Despite being on the heavy-side, Sam had her picture taken with Roman legionnaires at the Colosseum, in Rome, went on a gondola ride in Venice and enjoyed a pint of lager in Germany. During her visit in New York, other tourists were anxious to take pictures with her wearing a Statue of Liberty hat. Susan also took the skeleton to a Cubs game – where Sam was appropriately wearing a red and blue hat while holding a sign reading “Die Hard Cubs Fan!” Susan’s happy to have friends supporting her photographic project. “Most of my friends have been tremendously supportive about Sam 365,” Ms.  Weese explains. “They give me and Sam lots of skeleton gifts. Some have shared interesting bits of wardrobe,” that Sam wears like a pro in many of her pictures.

Susan posts photos of her and Sam from their unique trips around the world on her blog.