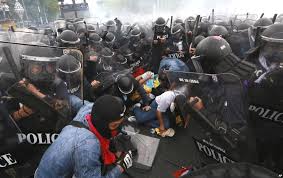 No fewer than 100,000 anti-government demonstrators have rallied in Thailand’s capital, demanding that the prime minister step down amid claims that her government is controlled by her older brother, ousted former Prime Minister Thaksin Shinawatra.

The peaceful rally, led by former opposition lawmaker Suthep Thaugsuban, appeared to be the largest staged by Thaksin’s opponents in several years.

Organisers are looking for the rally to continue overnight and cause maximum disruption on Monday, when demonstrators are supposed to march all over Bangkok.

The protesters say they want to topple the “Thaksin regime”, which is how they refer to the government of Prime Minister Yingluck Shinawatra.

Thaksin’s supporters and opponents have battled for power since a 2006 military coup ousted the former prime minister, who was toppled following street protests accusing him of corruption and disrespect for the country’s constitutional monarch, King Bhumibol Adulyadej.

Thaksin has lived in self-imposed exile for the past five years to avoid a prison sentence on a corruption conviction.
The battle for power has sometimes led to blood being spilled in the streets, and there is fear that the latest round of protests, which started last month, could lead to a renewal of serious political instability, after two years of relative calm under Yingluck’s government.

Police estimated that around 75,000 people had arrived at the main rally site by mid-afternoon on Sunday, with the total appearing to surpass 100,000 by evening.