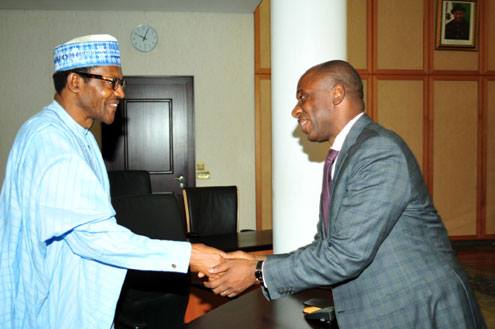 The former military ruler, who was speaking before a mammoth crowd at the Government House, Port Harcourt, explained the motive behind APC’s move to woo some governors of the ruling Peoples’ Democratic Party, PDP, considered as ‘progressives’ into its fold.

He said: “APC decided to target some governors that are progressives and we feel will make a difference. We seek your support through Amaechi. I lived in Port Harcourt during my military career. I was a staff officer to Gen Danjuma in 1973. Rivers State has produced great men such as professor Tam David West. 2015 will be another watershed in Nigeria. Amaechi is a great leader. We decided to come together to save Nigeria from misgovernance. We must come together and make Nigeria move forward”.

The three-time presidential candidate described Gov. Chibuike Rotimi Amaechi as a courageous and progressive leader that every progressively minded person should not toy with; stressing that some of his qualities are what a party like APC needs to move Nigeria forward.

“Amaechi has given Rivers people responsible leadership. The schools he has built will give Rivers children a better tomorrow while women and children stand to benefit from the standard health centers he has built. He has also carried out physical rehabilitation of infrastructures in the state. People like Amaechi should join the APC to move Nigeria forward”, he said.

Speaking also at the reception to welcome them to the oil rich city, another leader of the APC, Asiwaju Bola Ahmed Tinubu commended the Rivers governor’s supporters for defiling all odds to come out for the second day to receive them after their initially scheduled visit on Monday was postponed.

“We were ready to come on Monday but they closed the air space. But we don’t want to make trouble; we don’t want to offend anybody. We only want to solicit for your support. Amaechi is a progressive and visionary leader. He is a great leader”, he said.

He told the supporters that their governor was being unduly persecuted by the federal government as a result of his uncompromising stand that nobody should take away the state’s oil wells.

“Amaechi has anchored his economic program around the people of Rivers State. He has given Rivers people good education, given women and children quality health centers, built standard infrastructure.  We are in Rivers State to thank you for supporting Amaechi and also urge you to persuade your governor to join the APC”.

He said the APC is on a mission to rescue Nigeria from bad governance, intimidation and oppression and urged the governor to join the APC train to move Nigeria forward.

In his remarks also, the Interim National Chairman of the APC, Chief Bisi Akande described Amaechi as a brilliant and courageous leader that should join forces with the APC to rescue Nigeria from bad leadership.

“We are privileged to see Amaechi from time to time. We listened to the propaganda from the media that Amaechi had lost control of the State. We heard that Amaechi has no supporters. We wonder how a man who has no followers can become a governor of a state. We begin to see persecution which proves that Amaechi is very brilliant”, he said, describing the governor as a leader of all leaders and enjoined him to defect to the APC.

In his response, a visibly elated Amaechi pleaded with the visiting APC leaders to give him time to consult with the elders of the state, assuring them that when he arrives at a decision, a more colorful and massive rally will be held to herald his entry into the party.

“We are a group of governors but my case is peculiar among the other governors because the president comes from our zone. I will consult our leaders including the president. The day we will take decision on where to move we will gather our people at the new stadium we are building which has 40,000 capacity. We will mobilize all Rivers people on that day to take that decision”, he said.