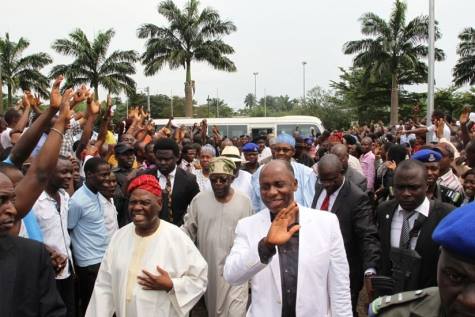 A group known as the South-South Progressive Vanguard (SSPV) has urged the leadership of All Progressives Congress (APC) to consider giving its vice-presidential ticket in the forthcoming 2015 presidential elections to the Rivers state governor, Chibuike Rotimi Amaechi.

In a statement signed by its coordinator, Comrade Frank Wilfred Ogbotobo, SSPV said Amaechi deserves to fill the slot due to his “real, matured and fulfilling political activism” as entrenched in the values of APC.

“Governor Rotimi Amaechi has demonstrated steadfastness, dogged commitment and loyalty to his tested convictions including the political will to face intimidating challenges and daunting decisions, all of which have endeared him to the oppressed masses of the S/South.

“As chairman of the Nigerian Governor’s Forum, Governor Amaechi has proven his leadership acumen and capacity to build the necessary bridges urgently required to fashion a new Nigeria on the foundations of equity, justice and true federalism which, we believe, would subsequently guarantee a revolutionary transformation of the Niger Delta region,” the statement said.