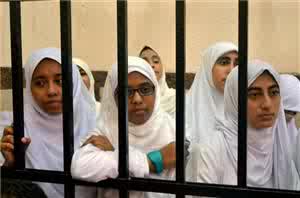 Following protests over the sentence of 21 women and girls who were sent to 11 years in prison for engaging in a peaceful protest, the presidential office has said Egypt’s interim president will issue a full pardon to the group.

The convicted protesters, who are supporters of ousted president Mohamed Morsi, received the harsh sentences for forming a human chain and passing out flyers in the city of Alexandria. The youngest member of the group is 15-years-old.

“President Adly Mansour will issue a full pardon to the Alexandria females after the final judicial process is completed in accord to the constitution,” a presidential advisor said in a statement circulated to journalists on Friday.

The legal process will still go through the appeal and cessation court processes, the statement added.

Images from the Alexandria courtroom where they were sentenced on Wednesday showed the group, wearing white headscarves and prison uniforms, handcuffed in the defendants’ cage, provoking fury in many Egyptians.

A demonstration against the sentencing turned violent on Thursday and one student was killed in clashes with police outside Cairo University.

Human rights organisations had heavily critcised the ruling, saying it marked a tougher resolve by the military-backed government to stifle dissent.

The government had earlier this week passed a law that restricts demonstrations. But hundreds of Egyptians defied the ban on Friday by taking to the streets in cities across the country.