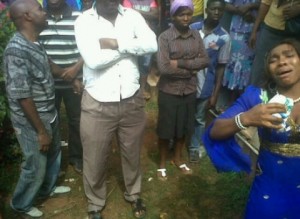 At least 25 persons, have allegedly died at a weekly crusade at the Holy Ghost Adoration Ministry, Uke, in Idemili North local government area of Anambra State, in a stampede at the end of the ceremony in the early hours of Saturday. Gubernatorial aspirant in the state, Dr Chris Ngige however said 15 people died.

The crusade, organized by Rev. Fr. Emmanuel Obinma for prayers, healing and spiritual retreat, attracts thousands of people, but the one that was held Saturday ended in a tragic way.

According to Saharareporters sources, the trouble started after Gov. Peter Obi of Anambra state and his party’s candidate for governor, Willie Obiano, visited the Catholic night vigil.

An estimated 100,000 worshippers attended the crusade because, apart from coinciding with the Feast of All Saints, it was also the first Saturday of the month.

Witnesses said that hundreds of people at the event didn’t recognise the presence of Gov. Obi and his candidate as expected, mumbling that their candidate of choice was All Peoples Congress (APC) candidate, Dr. Chris Ngige. Rev. Emma Obinma tried to pacify the congregation, but didn’t succeed.

As soon at the governor and his team left, fracas ensued at the entrance of the Church when the crowd raised alarm that armed men had arrived.

Meanwhile, Dr. Ngige has blamed the incident on Gov. Obi on his Facebook page, the APC candidate accused Gov. Obi and his APGA candidate, Willie Obiano of inducing the stampede after worshipers booed them.

“The priest in charge, Ebube Mmuo Nso had told Obi that the people already knew whom to vote for so should be left alone. Unfortunately, in the sheer act of wickedness, Obi’s goons charged into the crowd who booed at them and induced stampede, which led to the untimely death of 15 persons, including women and children while wounding many more,” Dr. Ngige said.

Corpses of those who lost their lives have been deposited at Immaculate Heart Hospital and Maternity, Nkpor and Charles Borromew Hospital, Onitsha. Several others who sustained various degrees of injuries, are also receiving treatment in various hospitals in Onitsha.