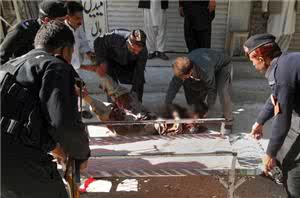 The army has now ben called in to establish control over the affected areas, officials say.

The violence centred on the city of Kohat, where members of the Sunni Muslim armed group Ahl-e-Sunnat Wal Jamaat held a rally on Monday to protest against the earlier killing of several Sunnis in Rawalpindi.

The deaths occured after firing by unidentified assailants near a Shia Muslim mosque in the city, which is located in Khyber-Pakhtunkhwa province.

“The activists were rallying against the Rawalpindi violence when unidentified gunmen opened fire on the procession from near a Shia mosque in the area, killing two people,” Saleem Khan Marwat, district police chief, told the AFP news agency.

Jaan said that there had been an exchange of fire between the two sides.

Marwat indicated that the ASWJ activists had been fired upon, before retaliating with their own gunfire.

Police and army troops later cordoned off the area and ordered markets to be closed. Troops were also called into the nearby city of Hangu, where tensions between Shia and Sunni Muslims were also high.

Friday’s violence in Rawalpindi erupted when a procession of Shia Muslims marking the most important day of the mourning month of Muharram coincided with a sermon at a nearby Sunni mosque.

That violence resulted in nine deaths, and the imposition of a curfew in Rawalpindi, a twin city of the capital Islamabad, that was only lifted on Monday morning.

A ban on gatherings of more than five people remains in force.

Troops were also deployed in Rawalpindi as well as in the southern Punjab city of Multan to keep the peace on Monday.

Pakistan is facing rising sectarian violence, with armed Sunni groups linked to al-Qaeda and the Tehreek-e-Taliban Pakistan often attacking gatherings of Shias, who make up some 20 percent of the country’s overwhelmingly Muslim population.