Police in Canada say 348 people have been arrested and nearly 400 children rescued during a three-year investigation into child pornography.

At the centre of the inquiry was a Toronto-based firm that allegedly sold DVDs and streamed videos of naked children.

Azov Films marketed the footage as “naturist” and claimed it was legal in Canada and the US.

The films were distributed in 94 countries, police said.

In Canada 108 arrests were made, with another 76 in the US and 164 in other countries during the investigation codenamed Project Spade.

Inspector Joanna Beavan-Desjardins, from Toronto police, said the number of suspects who had close contact with children was of particular concern to investigators.

Doctors, school teachers, foster carers and priests were among those detained, she said.

The head of Azov Films, identified as Canadian Brian Way, 42, has been in custody since his arrest in May 2011, following an undercover operation.

He is accused of paying people to film the children and has been charged with 11 offences. The company has been shut down.

US investigators then joined the inquiry because many of the films were being exported to addresses in America. Seven months later, a series of raids took place across Toronto, including at a site owned by Azov Films and Brian Way, police said.

Among the other countries involved in the investigation were Australia, Spain, Mexico, South Africa, Norway, Greece and the Republic of Ireland.

“It is alleged that officers located hundreds of thousands of images and videos detailing horrific sexual acts against very young children – some of the worst they have ever viewed,” police told reporters.

Ms Beavan-Desjardins said that Canadian officers, executing a search warrant at the home of a retired school teacher, found over 350,000 images and 9,000 videos depicting child abuse, with some of the victims known to the man.

He was also charged with sexually abusing a young child relative, she said. 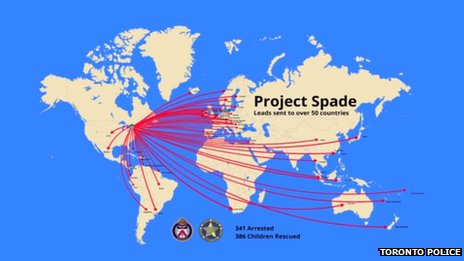 Toronto police say over 50 countries were involved in the inquiry

Gerald O’Farrell, Acting Deputy Chief Inspector of the US Postal Inspection Service, said all the victims identified were pre-pubescent, with some as young as five years old.

Mr O’Farrell detailed the cases of several US residents investigated as part of Project Spade, who have already pleaded guilty to crimes.

A school employee from Georgia, who had admitted receiving child pornography, had placed a hidden video camera in the toilets used by school students, the inspector said.

A pre-school teacher had pleaded guilty to producing child pornography while teaching in Japan, he said.

Mr O’Farrell said US postal inspectors had identified and rescued 330 child victims as part of the investigation.

Toronto police acknowledged the assistance of a website, cybertip.ca, which allows for the online reporting of the sexual exploitation of children.

The website had received many complaints about Azov Films which became the basis for the investigation, TPS said.‪