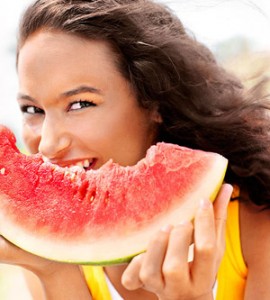 It’s time to de-puff that pouch! Bloating — fluid building up between cells in your body — can be caused by poor digestion, too much sodium, or your period. But according to experts, if you pay attention to what you’re eating, you can usually avoid it. Good news, right? Stay in bikini-ready shape all year long with these bloat-busting bites.

1. Water with Lemon
A lot of people skip sipping on water when they are bloated, when in reality they should be doing the opposite. People tend to think that when they’re holding on to water they should cut back drinking it, but that’s not the case. Retaining water is actually your body’s way of holding on to fluid so you don’t dehydrate. If you’re having a bloating problem, that’s the time you want to push fluids, not restrict them, says Grotto. Since lemons are a natural diuretic and a gentle laxative when added to warm water, consuming the liquid can help reduce the amount of salt retained in the body. Just make sure you drink from the glass and not through a straw, so you don’t take in any extra air.

2. Watermelon
All kinds of melons are beneficial to your health, but watermelon is known as one of the juiciest fruits on the stand. That’s probably because it consists of 92 percent water. According to Grotto, it also has a natural diuretic property and is a great source of potassium. “The balance between sodium and potassium is important when it comes to controlling bloat,” he says. For DIY spa water, try mixing lemon, cucumber, watermelon, and rosemary for an ultimate belly-deflating fix. (A word of caution: You may need to use the restroom more than usual when sipping on this.)

3. Rosemary and Turmeric
Rosemary has been used to treat everything from heartburn and headaches to toothaches and high blood pressure. But it also treats intestinal gas and helps digestion, says Jackie Newgent, RD, culinary nutritionist, FITNESS advisory board member, and chef. She suggests steeping it in your tea or combining it with celery or parsley to make your own cooking broth. Valued in Asia for its ability to fight pain and inflammation, turmeric is also key in aiding upset stomach and bloat reduction, says Newgent. Use the bright yellow spice in a curry dish or to flavor your favorite foods

4. Beans and Lentils
The majority of Grotto’s patients with bloated bellies are taking in too much sodium and not enough potassium and fiber. “Ramping down your sodium and increasing your potassium will have an almost immediate effect of reducing bloat,” he says. Lentils, with their high amount of fiber, are a good choice for aiding with digestion. Potassium-rich foods include white beans, soybeans, and lima beans — and they are also the highest-fiber vegetables you can get. Newgent adds that beans are naturally high in both estrogen and protein and can relieve period-induced bloat.

5. Yogurt
Since a lot of people are sensitive to lactose, it’s better to opt for yogurt instead of milk in your next smoothie, especially the kind with live active cultures in it. “Yogurt is already pre-digested and the milk sugar is broken down, where as in milk it’s not, which can create gas and bloating,” says Newgent. The nature of the active cultures lactobacillus and acidophilus found in yogurt can improve symptoms of bloating. Stir in some melon for an ultimate bloat-busting snack!