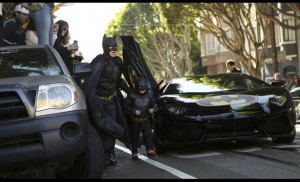 A five-year-old leukemia sufferer has fulfilled a wish to be a superhero after San Francisco, a charity and city residents came together to let him play crime-fighting ‘Batkid’ for a day.

Miles, from Tulelake in northern California, didn’t know what was in store for him and thought he was in San Francisco on Friday to get a Batman costume so he could dress like his favourite superhero.

Instead, his day started with a television appeal from the city’s police chief, Greg Suhr, and ended with him aiding a grown-up Batman stop Gotham City’s most fiendish criminals.

“Please, Caped Crusader. We need you. And bring the Batkid,” said Suhr in a televised mock appeal.

The bashful Miles at first seemed overwhelmed, quietly working through scenarios with an adult Batman sidekick, such as defusing a fake bomb and saving a woman, as crowds in their thousands chanted of “Batkid, Batkid”.

The Batkid was given a police escort as he sped around the city in a black Lamborghini “Batmobile”, which was decorated with a large Batman insignia.

By the time he reached City Hall to receive a key to the city in front of the biggest crowd of the day, Miles was all smiles.

It seemed that everyone was in on the surprise. At Union Square, the Chronicle newspaper distributed hundreds of copies of a special edition with the headline “Batkid Saves City”.

San Francisco Mayor Ed Lee later proclaimed November 15 to be “Batkid Day Forever” and the US president, Barack Obama, said in a message: “Way to go, Miles! Way to save Gotham!”

Miles was diagnosed with leukemia when he was 18 months old, but ended treatments in June and is in remission.

“This is closure for us,” Nick Scott said. “It has been a hard three years.”

Make-A-Wish has fulfilled similar wishes across the US. One child became Batman’s sidekick, Robin and another was a secret agent, said Jen Wilson, a spokeswoman for the organisation.

The Police in Alabam, US, has arrested a mum, grandmother and grandfather for allegedly locking children in cages. The suspects Pamela Deloris Bond, 66; James...
Read more