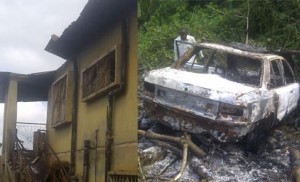 Sources say the traditional ruler, who lost his sight eight years ago was allegedly attacked by some hoodlums at about 8.00pm inside his palace and eventually died when the palace was gutted by fire caused by the suspected arsonist.

Firemen were said to have arrived the scene promptly, but could not douse the flames as they ran out of water.

Speaking on the incident, a traditional chief in the town, Chief Oluwagbemiga Oke, explained that the house in which the monarch was living, donated to the town by a prominent native, got razed shortly after some unknown people paid the king a visit.

According to him, the monarch had attended to five guests who came in a pink Mazda car before the incident happened, adding: “From what we were told, the house got burnt shortly after the people left.”

Also reacting on the incident, an officer of the state fire service, Mr. Michael Ogundipe, ruled out the possibility of electrical fault, saying that findings by his men revealed that the case was arson.

Ogundipe who took officials of the state government, including the state Commissioner for Information and Strategy, Mr Sunday Akere, Commissioner for Culture and Tourism, Alhaji Sikiru Ayedun and Special Adviser to the Governor on Security, Mr Amos Adekunle, round the palace said there was nothing that suggested electric surge from the findings made at the scene of the incident.

It was gathered that two of the monarch’s children and his house maid escaped unhurt while the fire raged, but the monarch could not help the situation due to old age and blindness.

The corpse of the monarch had since been removed from the burnt palace through the combined efforts of the Osun Ambulance Services and officers of the Nigeria Security and Civil Defence Corps, NSCDC, and taken to the Ladoke Akintola University of Technolog, LAUTECH, Teaching Hospital, Osogbo where an autopsy would be conducted.

Police detectives from the state Command are now investigating the circumstances surrounding the death of the monarch. The house maid of the monarch whose name could not be ascertained has been arrested by the police.

Commenting on the development, an Ijesha High Chief, the Omu-Owode Ijesha, Chief Adejumo Operinde said all necessary rituals would be done by the people of the town in accordance with the tradition.