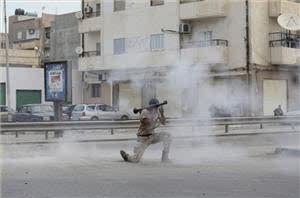 At least nine people have been killed and 47 wounded in Benghazi during a military operation, as tensions deepen between government and armed groups, according to the Interior ministry.

The Libyan army on Monday declared “a state of alert” in Benghazi and summoned all troops to report for duty after the battle with Ansar al-Sharia fighters erupted.

Gunfire and explosions could be heard and thick smoke rose from the Ras Obeida area of the city. The army ordered residents to stay off the streets, witnesses told the Agence France Press news agency.

Fighting was said to have broken out when an army special forces unit chased a suspect into an area where Ansar al-Sharia operates its own checkpoints, Benghazi city security officials said.

Rival militia groups withdrew from Tripoli last week after clashes killed more than 40 people when protesters marched to one of the fighters’ bases to demand they leave the capital.

The clashes came as US Secretary of State John Kerry and the British Foreign Secretary William Hague met in London with Libyan Prime Minister Ali Zeidan, who was briefly abducted in Tripoli last month by the same militia.

Kerry said after the meeting that the US and Britain would continue to support Libya, following weeks of violence in the country, without specifying.

“The Prime Minister informed us of a transformation that he believes is beginning to take place and could take place because the people of Libya have spoken out and pushed back against the militias,” Kerry said.

The government has hired some of the armed groups to provide security, but they remain loyal to their commanders or tribes, and often clash in disputes over territory or personal feuds.

The Libyan government has struggled to restore order as fighters, most of whom were among the rebels who fought in the war that toppled Muammar Gaddafi in 2011, defy the new military’s attempts to disarm them.