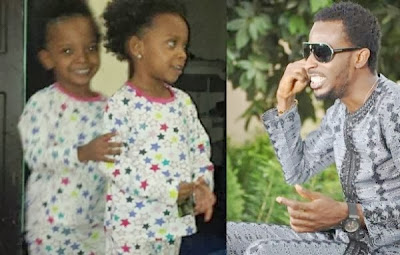 Shortly after his marriage to ex-wife Toni Payne packed up in 2010, Gongo Aso crooner 9ice welcomed a set of twin daughters with another lady Vicki Gordis.

When the news first became public, 9ice fiercely denied the story, saying the press had made it up. Not until he proudly shared the pictures of his adorable twins on Instagram some weeks back.

And in this new interview with Punch, 9ice finally explains why he lied. Why did you deny you had twins when they were born?

– I did say I didn’t have twins then because I believe it was personal. If I have N1m, I think it is only my account’s officer that should know how much I have. In fact, he wouldn’t even have the right to check my account unless I ask him to do that. He couldn’t just cull up my account details and start checking how much I have. This is not a car we are talking about, these are human beings.

But when they grow up, do you think they will forgive you when they read that you once denied them?

– I will tell them the reason I did that. It was the same way my father gave me his own reasons. I didn’t know him until I was 22. I got to know my mother when I was 18. They gave me their reasons for doing what they did. I asked my father where he was all the time I was growing up and he told me where and how and when he was a part of my life. If my kids grow up to ask me why I did what I did, I would certainly explain to them. I didn’t say I didn’t have kids just because I wanted to lie, No. I had my reasons. I had my life to live.

You are in showbiz, so you shouldn’t expect to have a private life…

– But there are still some elements that are personal. I didn’t fight anybody when the stories came out. I just didn’t say anything because I wasn’t ready to talk about it. I wasn’t ready to share the story. When I got ready, I even shared the pictures of the twins. Who knows, I could have even used their pictures to make money and sell to a publication that wanted them. But I just released the pictures.

Do we see you getting married to their mother soon?

– I will get married soon. It is very possible.

But is she the one you are with at the moment?

– I am not saying anything on that. No comment.

Let’s go back to what you said earlier on about not knowing your parents until you were a young man, how did it happen?

– It is going to be in my autobiography. I am going to make money out of the story. I am not divulging it. Nobody knows about it yet.