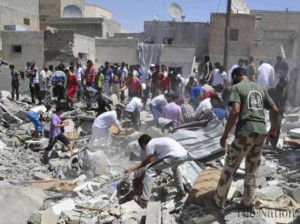 Warplanes targeted rebel positions in an opposition-held district of Aleppo city on Saturday, but the attack missed the target and slammed into a crowded vegetable market, killing 14 people, the Britain-based Syrian Observatory for Human Rights says.

In a separate airstrike on the town of al-Bab near Aleppo, 15 people were killed, it says.
Another activist group, the Aleppo Media Network, confirmed the airstrikes and posted a video of what it says was the aftermath of the al-Bab raid.

Plumes of smoke are seen rising from ground, strewn with twisted metal and chunks of broken-up concrete.

Men can be seen pulling a person, who appears dead, out of a car.

The videos appeared authentic and corresponded with The Associated Press’ reporting of the airstrikes.