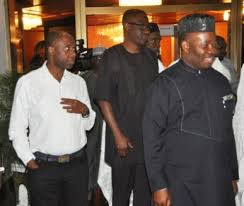 The Abubakar Kawu Baraje led faction of the Peoples Democratic Party (PDP) also known as New PDP has berated Governor Godswill Akpabio of Akwa Ibom State for daring the group of seven (G-7) aggrieved governors to leave the ruling party and allow President Goodluck Jonathan to concentrate on his task of governance.

The G-7 governors, made up of Abdulfatah Ahmed (Kwara), Aliyu Wamakko (Sokoto), Babangida Aliyu (Niger), Murtala Nyako (Adamawa), Rabiu Kwankwaso (Kano) and Sule Lamido (Jigawa) in recent weeks, played host at separate times to high powered delegation of All Progressives Congress (APC) leaders, where they hinted that they could decamp to the opposition or join forces with them as 2015 approaches.

The G-7 governors are opposed to the Bamanga Tukur-led National Working Committee of the PDP just as they are believed to be against President Goodluck Jonathan’s perceived second term ambition which prompted Gov. Akpabio to challenge them to take a clear stand on where their allegiance belongs.

Speaking with State House correspondents Monday on the sideline of the launching of the third edition of the Youth Enterprise with Innovation in Nigeria (YouWin) programme in Abuja, Akpabio had cautioned the rebel governor’s against taking undue advantage of President Jonathan’s perceived patience and humility to distract him.

“I just believe strongly that we have a very humble and patient President. I hope that we don’t take advantage of these attributes to waste his time and distract him”, Akpabio said, adding that “I don’t see a problem in the issues of certain politicians wanting to change party. It is a normal thing in politics that people move from one political party to the other. But what is important is that we move on and the country moves on”.

Insisting that should the rebel governor’s finally decide to make good their threat of decamping to the opposition, Akpabio said “the PDP is very big and robust, with  branches in 774 local government areas; if you have five persons moving away from it, you have 10 to 50 moving into it”.

But the New PDP, through its spokesperson, Chukwuemeka Eze, described Akpabio, who is Chairman of the PDP Governors Forum (PDPGF), as the brain behind those plotting to discredit Jonathan if he ventures to contest the 2015 election.

It said, “Because of his inferiority complex, he (Akpabio) does not want those who are better than him in all ramifications to be in the PDP. All the G-7 governors are his superiors in politics.

“He has lost ground in Akwa Ibom and can’t guarantee his ward for the PDP much less of the state. He is the arrowhead of 16 is superior to 19 to exhibit his poor understanding of democracy”, the New PDP stated.