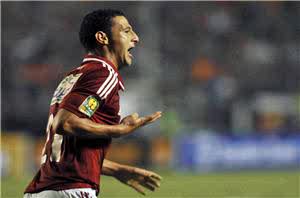 The newly crowned champion said that the 28-year-old forward was suspended on Monday for showing the sign after scoring the second goal in a 2-0 win over South Africa’s Orlando Pirates in the African Champions League final second leg in Cairo on Sunday.

Ahly won 3-1 on aggregate for its eighth continental club title.

The suspension means that Abdel-Zaher may miss next month’s FIFA Club World Cup in Morocco, the club sources said.

A senior member of the club told AFP news agency on condition of anonymity that the move to suspend Abdel-Zaher was being taken because “he mixed politics with sport”.

Egypt’s minister of state for sport, Taher Abu Zeid, said in a statement that he “expects” the nation’s football federation to “suspend and fine Abdel-Zaher the way Kung Fu fighter Mohamed Youssef was”.

Egypt’s Kung Fu Association banned Youssef from international championships for two years after he wore a T-shirt bearing the four-finger sign last month at a tournament in Russia.

“The ministry itself cannot take such decisions but the concerned institutions can,” said Abu Zeid.